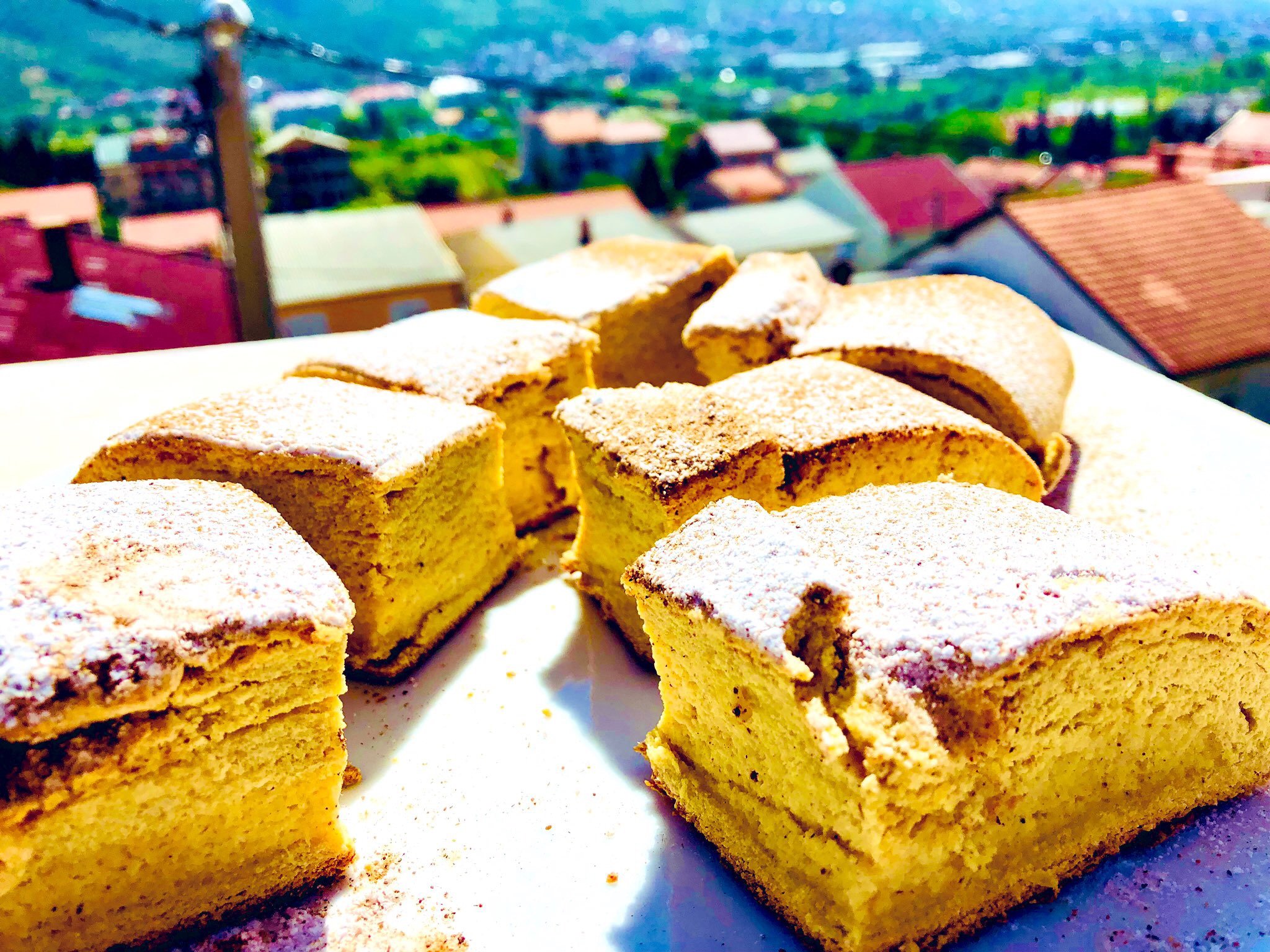 Keto Bougatsa sounds like mission impossible if you keep dreaming about paper-thin phyllo dough. But when we ketonised tiropita, many of the open-minded lovers of Greek traditional pastry raised their hats! Yes, Keto phyllo dough cannot be as thin as paper. But it can be delicious and crunchy! What’s most important, Keto version is nutritious and healthier than wheat flour phyllo dough. In fact, what gives Bougatsa its wonderful flavour is the custard in the middle. And you don’t need to use starchy semolina to thicken it! With just the right amount of egg yolks, mascarpone and aromatic spices, you’ll enjoy the same culinary fairytale!

For Non-Greeks, what is Bougatsa?

Bougatsa is a traditional phyllo dough custard pie from northern Greece, in particular, from the Macedonian region. We could say it’s a Thessaloniki speciality. Apolonas says he tried minced meat version in Alexandropolis which was the best Bougatsa in the universe. This reminded me of Burek.

However, if you ask for a Bougatsa in Athens or in any other Greek town or island, most probably you’ll get the vanilla custard version.

In the original recipe, they are cooking eggs and semolina in milk and then add butter. Of course, with a tone of sugar and some vanilla. Then they wrap this carby filling in phyllo dough and bake it until it gets crispy. Hot Bougatsa is then sprinkled with powdered sugar and cinnamon. Perfect! Well, for Diabetes, maybe? 😮

The origin of Bougatsa comes from the geographical area of Byzantium; more precisely, from Constantinople. Before 1453 A.D., in this historical city, every corner had a bakery with some sort of traditional pie called Pogatsa.

I would like to invite you to read our article about Balkan traditional Pogača where we discussed the origin of this word. Yes, as you might have assumed, Pogača and Bougatsa have the same etymology.

Old Ottoman books inform us that the word “Pogatsa” is linguistic exploitation of the Latin word “Foccacia” which means sweet pie. After all, the Byzantine empire was the Eastern Roman Empire, wasn’t it? Even if Bougatsa obtained its name from the dessert inspiration, it was never restricted to its sweet variation. On the contrary, there have constantly been Bougatsa versions with cheese or meet.

How did it become so popular in Greece?

Bougatsa became known in Greece in the period after the Greek-Turkish war in 1922. It first appeared in Serres, because most of the Greek immigrants from the East settled down in this city. Thessaloniki, as the biggest city of that area, embraced it with adoration. Today, they say if you didn’t try at least one version of Bougatsa your visit to Thessaloniki was pointless. But if you are on Keto and you want to stay on Keto, you’ll skip that part! 😉

What do we have against the original version?

As history teaches us, Bougatsa was supposed to feed the workers in the fast-growing Thessaloniki port and it was supposed to be cheap. In order to make something cheap and produce a large amount of it, humans have always turned to wheat flour. But it had to be tasty. This is where eggs, butter and sugar step in. If we learned something from the carby world, the worst thing you can have is the combination of high carbs and high fats. Yes, it tastes awesome, but it always leads to weight gain, inflammation and other metabolic problems. It’s the most tragic combination, regardless of the pleasure!

Well, if something tastes so good and has so deep and long tradition, then it deserves some attention from the Ketonisation point of view. I mean, butter, eggs and cinnamon are extremely healthy ingredients. What can we do to make the experience as similar as possible to to the original? At the same time, keeping the wheat and starch, not to mention sugar, away? Of course, we can play with some Keto friendly flours, put the emphasis on good fats, and replace the sugar with one of the harmless sweeteners.

To put it simply, if you are a Keto foodie, and if you want to continue your Keto journey with exploration and experimentation, then this wonderful Keto Bougatsa is ideal for you! On the other hand, if you are a Hellenophille, or if you are Greek – this will bring a big smile to your face – we promise 🙂

Let’s just get to work, you’ll enjoy it…

You can cut from 8 to 12 decent pieces and serve them warm. This Keto Bougatsa is equally tasty if you decide to serve it cold on the next day.
Keyword Keto Bougatsa