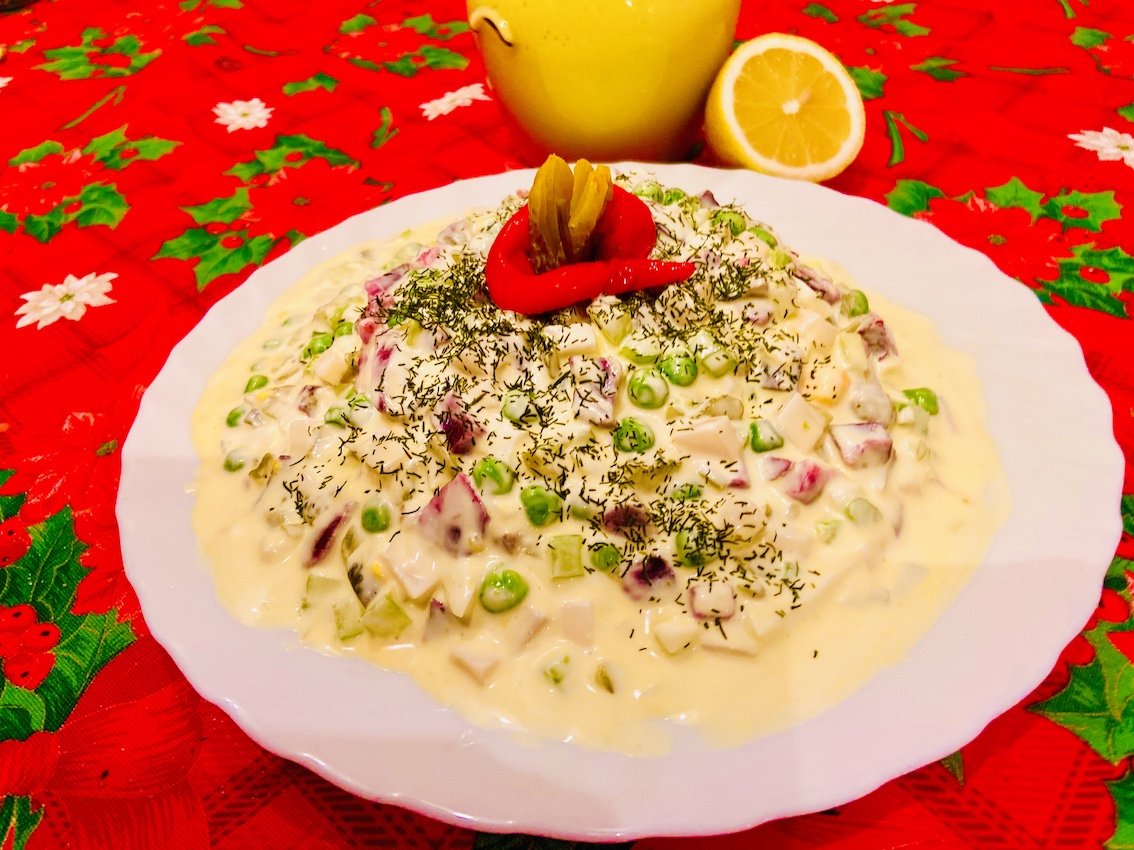 Keto Oliver salad? This will be easy to Ketonise, one might think. But if you have no idea what are the original ingredients in the world-famous Oliver salad, then you might get quite surprised. The mystery of this famous European New-years salad goes back to the romantic Russian times before the October revolution.

In the tradition of Balkan people, there’s no New year’s celebration without this rich and creamy salad. Ever since I was a child, I simply adored the combination of smoked meat, creamy mayonnaise and chewy cheese. On top of that, the crunchy and sour impact of pickles! My late father would always add some sour apple and he would not allow potatoes! Potatoes have no place in a festive dish – he would point out!

We never called it Oliver salad, we just called it French or Russian salad. When I think about it today, it makes sense. Nobody ever knew the secret ingredients of Olivier salad. Nevertheless, our people made a strict distinguish between something called French or Russian salad. The difference was that French salad had chopped boiled chicken, while the Russian version had smoked ham cut into small cubes. I learned later, that was a Yugoslav invention, such difference never existed in any other country.

It’s all French but Russian to me

The so-called French salad doesn’t have much to do with France. It was neither made in France nor made by a French chef. It was actually made in Moscow in 1860 at the famous Hermitage Restaurant, where it was secretly prepared by chef Lucien Olivier, a Russian chef of Belgian roots.

Chef Olivier had a separate chamber in the kitchen of his restaurant where nobody could enter. That is where he privately made his exquisite art. The salad became extremely popular, that even Tsar Alexander II came to the restaurant to try it. Chef Lucien Olivier died in 1883 and took the mystery of the salad to his grave.

If it wasn’t for Oliver’s apprentice, nobody would know about its existence today. Here’s how it happened. As chef Olivier was hiding the recipe, his assistant Ivan Ivanov somehow managed to arrange a similar salad, which he later offered at another restaurant.

Although it didn’t quite hit the original flavour, he popularised the dish by selling the recipe to numerous publishers. The recipe was first published in the Russian magazine Our Food on March 31, 1894. The salad was not called after the famous Chef until he died and his family left Russia right before 1917.

Hundreds of versions and a small Keto twist

Olivier salad is beloved all over Europe, in Israel, Iran, Mongolia and all the way to Latin America. People usually prepare it during the holidays. Some versions have more meat while others feature seafood. There are actually hundreds of different versions around the globe.

Over time, the original recipe changed and got refined, as is often the case with the originals. This is because of local foods, the cost-effectiveness and also personal preferences.

The mysterious Olivier’s salad contained veal, caviar, lettuce, lobster, capers, cucumbers, hard-boiled eggs and green peas. Quite different from what you will find in many Russian or French salads today. However, like all posh foods from the end of 19th and beginning of 20th century, the ingredients sound quite Keto friendly.

To make Keto Oliver salad, one must just exclude the infamous potatoes. But to really make it Keto Mediterranean style, you’ll have to make your own mayonnaise by following this recipe. Now I know that this requires time, but KMD postulates say that we don’t rush and enjoy the process of creation.

The ending result was pleasing in any possible way. I knew it’ll be tasty, but had no idea it’ll stay equally fresh after a couple of days in the refrigerator. Naturally, you have to seal it well, preferably in a glass container with a good lid. So, arm yourselves with patience and enjoy the reward! 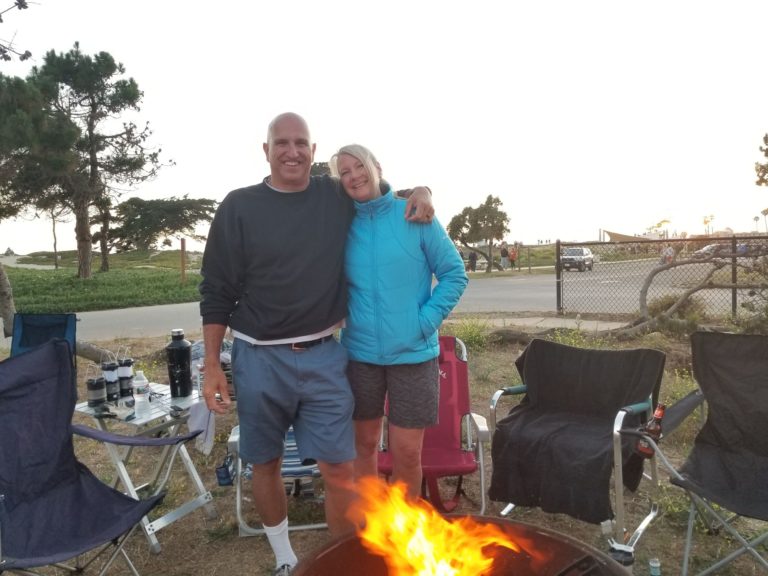 Ketonian, what does it mean? It’s is a term many of you became accustomed to since we use it often in live videos, articles, or on our apparel. But what does it actually represent? It’s not just another way to describe a person who’s following the ketogenic diet. It’s much more than that! Now, we… 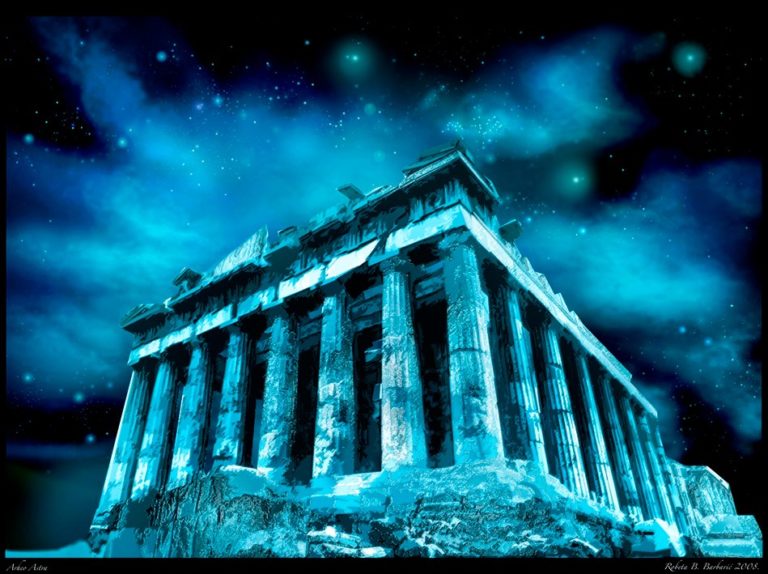 Christmas menu in the land of Ketonia Jingle bells, jingle bells, Keto all the way! Oh, what fun it is to make Keto meals and treats! No, really, after a full year of running Greek Goes Keto, all we can say is – This is fun! The ketonisation is as exciting as any other cooking and… 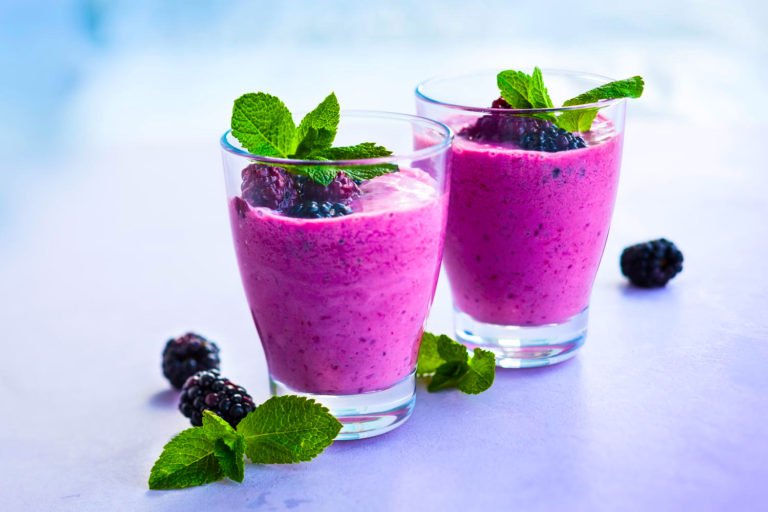 Homemade Keto Protein Shake is a project that I want to devote to all the Ketonians who decided to skip the supplements and explore the world of real food. When we say real, we mean the world of foods that don’t cause inflammation, yet the foods that are somehow forgotten. 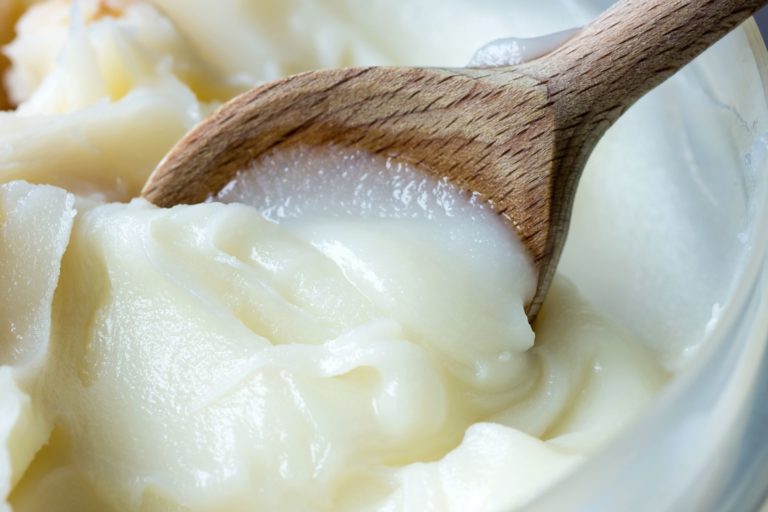 Homemade hand cream is the only thing that saves my dry skin these days. Since all of us are in the same waters, or better say, the same soap, we get the typical hand dryness effect! Your skin is the largest and best-protecting organ you have. Imagine, it even protects you from viruses if you… 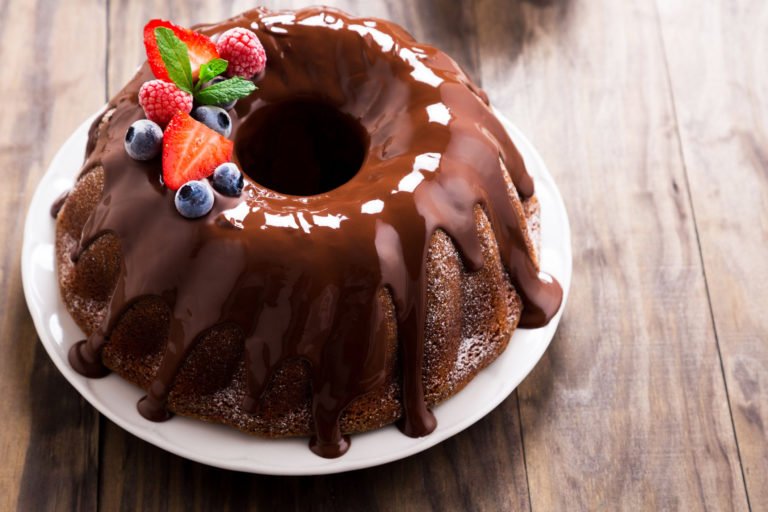 Flourless Keto chocolate cake was a huge success and you can check the recipe here. I published it this summer and it was quite refreshing enjoying it cold after a good Keto meal. But, I thought to myself, how to bring this creation to a higher, more festive level? As a person born in October,… 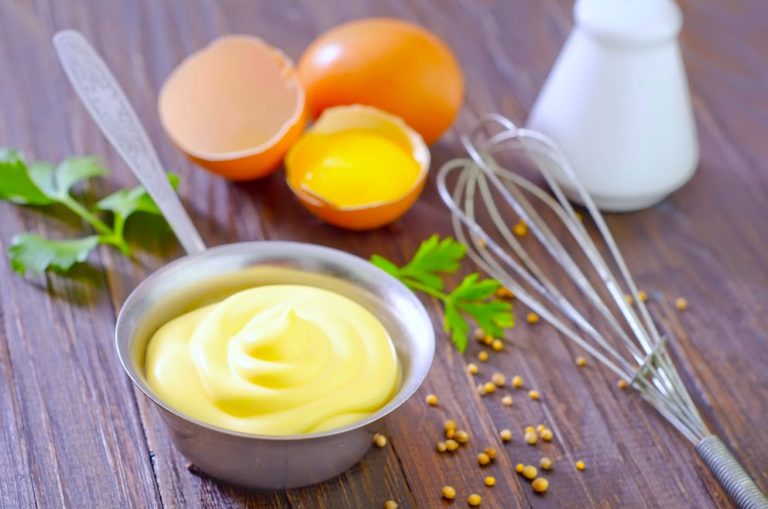 Hollandaise sauce is the most Keto-friendly classic sauce on this planet! Yet, somehow, it lives in the shade of Mayonnaise. But Mayonnaise is just a less rich version of egg-yolk emulsion sauce, isn’t it? Unfortunately, people love the fact that they can buy it ready in supermarkets! However, industrial Mayo, could be the most unhealthy…