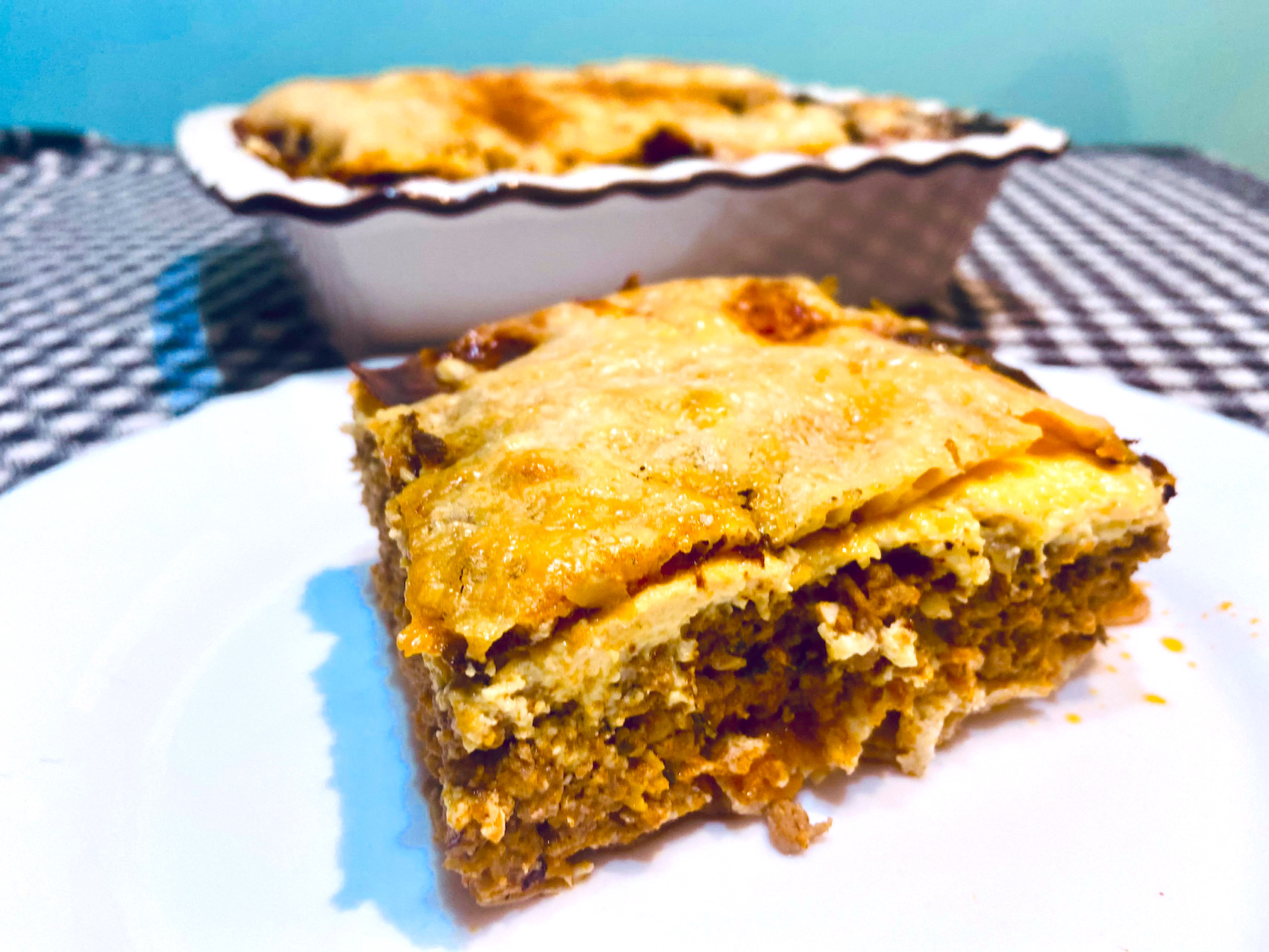 Pastitsio, Keto version that looked more like a pie, was published a bit more than two years ago. Well, it was just an attempt to bring back the flavour of original Pastitsio. Unfortunately, the texture of thick spaghetti was simply impossible on Keto. But, with the discovery of egg tagliatelle, a Pastitsio with almost no carbs had to be ketonised!

As the name says, it’s a well-known Greek (and Italian) comfort food typically made with pasta, minced meat, béchamel, and cheese topping. Some think that it was inspired by Moussaka. For decades, Pastitsio was used for the purpose of enchanting the tourists with Greek cuisine. But Pastitsio, the way it’s traditionally made, represents the unhealthiest approach to modern cooking!

Why is the original version of Pastitsio so unhealthy?

For those of you who don’t know much about Pastitsio, our previously published Keto version might have all the answers. Form the historical view, Mediterranean aspect and, of course, the problem of Béchamel. As we can conclude now, béchamel was invented during the shortage of cream. French chefs had to come up with a way to thicken milk and continue using it where normally fresh cream or even sour cream would be used. Well, starch, the old way of turning food into a “concrete” for the guts was used here. In some versions just plain flour, but in most recipes – extracted corn starch. And then butter or margarine was added to give the illusion of cream. However, this is as unhealthy as it can be!

Imagine topping carb-loaded pasta with such starchy creation and also adding greasy minced meat sauce to make the amount of fats and carbs equal. This literally leads to all the problems humans face when their nutrition had the same amount of fat and carbs… But, Pastitsio tastes and feels heavenly! So, why don’t we try excluding those carbs and leave the protein and fat where it belongs? It’s not only about macros, but in this version, we’ll make sure micronutrients are well balanced too!

Whatever can be Ketonised without adding flours (even Keto flours) will be our victory! We are still a foodie oriented website, but we want to take a next step in the process of ketonisation. In particular, our quest to make traditional recipes healthier. Our lifestyle and knowledge about KMD rapidly grows. By excluding flour, even almond and coconut flour, we will still be able to have the taste of childhood!

Why is this important? Well, some ketonians experience extremely bad symptoms when trying the standard dishes that they have been missing throughout their healing path. For them, and for everyone who believes that healthy can be delicious, our new Keto Pastitsio has been born!

After trying this version, we stayed amazed with the texture. In fact, we worried about the texture of egg noodles. Will they be able to support the heaviness of meat sauce and our Ketonised béchamel. After leaving the Keto Pastitsio to properly cool down, we were able to cut perfect portions and enjoy them the same way original Pastitsio is served. The egg-white based crepes cut into stripes, as we used it for tagliatelle creation, worked as a perfect base with no guilt! The texture came out as closest possible to the original Pastitsio! Maybe the egg-white crepes could have been a bit thicker to emulate the chewy effect of pasta! All in all, this was one of the best ketonisation of a traditional Greek dish we ever created.

Before we give you a detailed recipe, check out some game changing ingredients that are typically used for Pastitsio preparation. We assembled a list of product that will bring your Keto Pastitsio to a wonderful level of gourmet Keto creativity from the Mediterranean kitchen!

Pastitsio with almost no carbs